Video Game Console Of A New Generation- OUYA by Boxer8

In the wake of the new generation of consoles coming to the market this holiday season, the launch of something a bit smaller and targeted at the casual gamer might have slipped under the radar for many. Indeed, OUYA is not the type of console a gaming enthusiast would like to have, but I’m sure that it will appeal to those who don’t mind their games being of the arcade and indie variety. Still, OUYA is a new console, and it’s truly a product of new generation of consoles – consoles for the casual market.

Yes, it’s true that all of us, hardcore gamers, are impatiently waiting and counting the days until the arrival of our new favorite consoles – whether it will be the PS4 or Xbox One (or both). However, while we wait, we might as well have a look at something rather new and entertaining, small and inexpensive and definitely innovative. Let’s have a look at what OUYA is and why should you care. 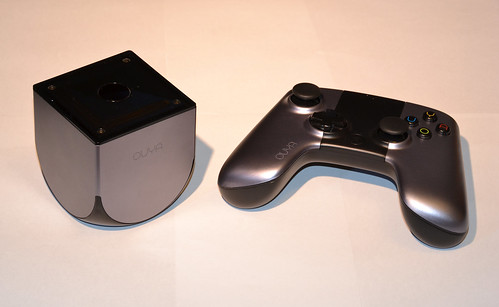 I’m not going to compare the OUYA to the new consoles coming out this holiday season because there is not even a single line of comparison that can be given in any way, shape or form. First of all, the OUYA is 4-5 times cheaper and probably less powerful with the same factor. They also have different target audiences. And last, but not least, the OUYA is much smaller.

Come to think about it, being an Android-based micro console, the OUYA has its own dimension in the space-time marketing continuum. It basically doesn’t have any direct competition, the closest thing to it on the market being the nVidia Shield, which still costs 3 times as much and serves a different function.

One could argue that, appealing to the casual gamer, the OUYA will go head to head with the Wii U, but the price difference and the overall platform of the console separate it completely from the current ecosystem.

If you’re thinking about AAA titles and multimillion dollar blockbusters, you can forget about it. What you get with OUYA is indie and retro Android-based games and even though I admit some of them are entertaining, I can’t picture someone taking gaming seriously as a hobby spending hours upon hours trying to perfect their Dub Wars skills. Don’t get me wrong, the games do have enormous entertainment value for the casual gamers who don’t really spend too much time in front of the screen.

What you will find when you open the store is that most of the games are indeed either arcade or indie, which is, of course, not a bad thing. I’m always glad to see some from of progress in the field, wherever it may come from, and in my opinion indie developers are among the biggest drives of gaming evolution. They are not scared of taking risks and they always think innovatively.

The OUYA Hardware and Software

OUYA runs a customized version of Android 4.1 with its own interface. It also has a very neat online store, online distribution being their means of dispersion.

The system packs a 1.7 GHz quad-core ARM Cortex-A9 processor and an nVidia mobile GPU with 1GB of operating memory and 8 GBs of storage capacity. You also get HDMI, USB and of course an Ethernet port, wireless capabilities and Bluetooth.

The controller is pretty similar to the Xbox 360 controller, albeit of a lower quality (let’s not forget that the console only costs $99) with the same basic functions and a touch pad to use the integrated internet browser.